"The Winchester rifle deserves a place of honor in every black home." said the 4'6" African American school teacher.  The Winchester repeating rifle was the "assualt rifle" of it's day.  And here in the dark days after the American Civil War, is a black school teacher and eventual icon of African American History recommending that EVERY black household have such a weapon at the ready and help in conscious reverence! 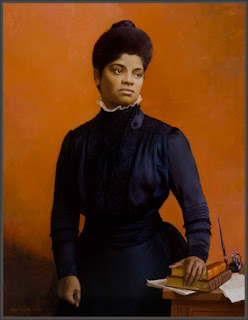 What Ms. Wells lacked in stature she made up for beauty and many times over in spirit.  Few in the black narrative have had so little to lean upon and propped up so many from so far down.  Ms. Wells survived what Professor Johnson labeled the nadir of black history.  The lowest, darkest point in the experience.  Yes, lower than the days of slavery.  For in the middle and late part of the 19th century freedmen had graduated from slaves to victims and targets.  Lynchings were rampant. Blacks were killed indiscriminately and terribly and the law was seldom on their side to protect, defend, and certainly not to provide justice.

In this treacherous environment the diminutive Wells struck blow after blow for justice and security for the black community in America.  She initially sued railroads for discrimination and abuse of black passengers.  However, her greatest victories were against the horrific practice of lynching. The modern day American has no clue that in the 1890's if you accused a black man in the south of any crime, chances were that within 24 hours he would hang by the neck (or worse) until dead .  Nevermind the police, courts, lawyers--fairy tales in 1890--black men and women were slaughtered because a white person said they did such and such.  This simple violation of core human rights was the target of Well's keen aim and the justification for her call to arms.

She advocated, wrote for multiple papers and publishers and artfully refuted both white and black detractors. Her discovery, declaration, and condemnation of lynching was the chief accomplishment of her life's work.  Americans of every race, then and now, were and are largely ignorant of the number of killings that took place via the sham-justice of the lynch mob.  Black folks were emblazoned by oratory servants like Wells to fight back against the KKK, Jim Crow, and lynch mobs.  Godly whites were awakened to help and often opened the door for leaders like Wells, W.B. DuBois, and others who eventually became the NAACP.  It was a slow, bloody, fiery struggle.  Through forceful effort even to victory, Ida B. Wells-Barnett earned her place in Black History.
#blackhistorymonth


*My thanks to Professor Nicholas Johnson of Fordham Law School and his book Negroes and the Gun: the Black Tradition of Arms. 2014, Prometheus Books.  And some wikipedia stuff too.

Email ThisBlogThis!Share to TwitterShare to FacebookShare to Pinterest
Labels: #blackhistorymonth