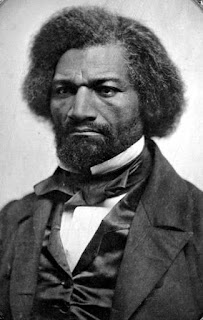 Frederick Douglass advised the best defense against slave catchers was a good revolver. I think that detail was omitted from my history lesson as a child.  Douglass knew that in 1854 the law could not be relied on to protect blacks straining to regain their natural state of freedom and liberty.  The Fugitive Slave Act of 1850. Interestingly, Abolitionists began to fight the measure as an overreach of the federal government. But while politicians debated and citizens resisted, the black man was hunted, kidnapped, or worse.

The most inspiring story I've read of Frederick Douglass is the moment young Fred Bailey stood up to the "N***er-Breaker" Mr. Edward Covey.  This despicable fellow was known for breaking the will of strong willed slaves by any means necessary.  Young Fred defeated Covey and another white man with nothing more than his fists, dignity, and perhaps Divine blessing. For that moment of resistance began the inevitable evolution of Fred Bailey the slave to Frederick Douglass the orator, abolitionist, freedman advocate, and statesman.

Consistently and advocate for self defense rather than political violence, Douglass was welcomed by both ethnicities bent on freedom for all men--and his enemies could never match his wit and mind in civil discourse.  At the 1888 Republican National Convention, Douglass became the first African American to receive a vote for President of the United States in a major party's roll call vote. Ever the orator and advocate Douglass is one of the most important figures in African American history.


A man's rights rest in three boxes.
The ballot box, jury box and the cartridge box.

*My thanks to Professor Nicholas Johnson of Fordham Law School and his book Negroes and the Gun: the Black Tradition of Arms. 2014, Prometheus Books.
Posted by JTOden Realty on February 02, 2016

Email ThisBlogThis!Share to TwitterShare to FacebookShare to Pinterest
Labels: #blackhistorymonth